How To Decertify Union

Decertification refers to the process where the National Labor Relations Board (NLRB) allows employees to call for a special election to get rid of the union as their “exclusive representative.” It is important to remember that your company cannot help or assist you with decertifying a union. You can reach out to other organizations to help. Feel free to contact us at 800-888-9115 for a referral.

The objective of a decertification election is to terminate the union’s right to represent you and your fellow employees. This procedure provides you with full relief by taking away the union’s authority to act as your bargaining representative.  If you are a part of the employee union that is covered under a collective bargaining agreement (whether you are a union member or not) you can still sign a petition and participate in the vote for decertification.  Once the union is removed as your legal bargaining representative you no longer have to join the union or pay dues or fees to it.

View the video above to learn in detail how to decertify a union. Here is a quick outline of how to do it: 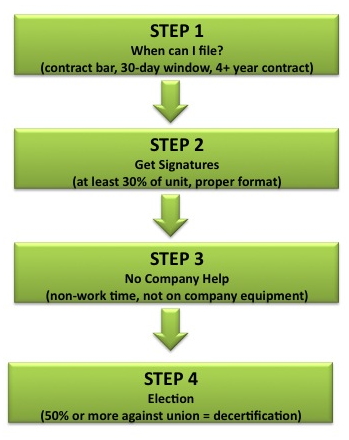 Step 3: Employees can only perform decertification efforts during non-work times and in non-work areas.  Also, management cannot be involved in any way in this effort.

Step 4: If at least 50% or more of the employees vote against union representation then the company will be union free and employees will be able to deal directly with the company on issues related to pay, benefits and working conditions.

When your union hears about employees bid to get out of the union, they will not be happy.  However, there’s nothing they can do to prevent you from exercising your rights.  They may try to pressure or coerce you into changing your mind. Threats or coercion by union representatives are illegal and constitute an unfair labor practice.  If the union tries to coerce you or your coworkers in any way, you should immediately report this to the NLRB and, if you want, to the company.  It is the NLRB’s duty to prohibit such action on the part of unions and to ensure that your right to seek an election will be protected.

The NLRB has ruled, and the courts have upheld, that a union may not discriminate against a member for taking action to have the union decertified. An election is the legally accepted way to determine the desires of the employees in the unit on the subject of union representation.  The federal government will see that your right to an election will be protected and that the election will be conducted fairly.

In addition, nobody will reveal the names on the petition that is submitted to the NLRB and the decertification election is conducted by secret ballot so neither the union nor the employer will know how any individual voted unless they choose to make their vote known.

You can have signatures on more than one piece of paper, but you should have the text at the top of EACH PAGE of the petition so it is clear that every person signed a petition clearly describing its purpose. Remember only to collect signatures during non-work time and in non-work areas and do not ask a member of management to help with your petition.