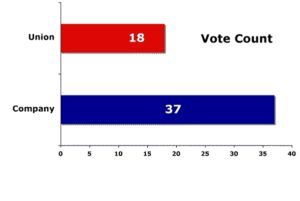 The Teamsters filed a petition against this company - its second union election - with reported 80% support. The company did not engage our services until 3 weeks were left to the vote (they had done no campaigning up to that point). This company owned 2 locations on the same piece of property - the employees at the second location had been represented by a union for years. The company almost decided not to fight the campaign because they thought the cards were stacked so far against them.

The major issues in this campaign were a series of management changes that resulted in a leadership vacuum for a period of time. During that period first-level leaders were left with little power to answer employee complaints. Naturally many of these complaints went unanswered for months.

When we were finally engaged to run the campaign time was limited. But we hit the ground running. Using a combination of employee meetings and heavy engagement of the local management team we defeated the union by a 2 to 1 margin. 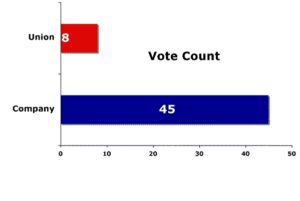 This winch manufacturing company was surprised by the Teamsters petition and had no notice of any problems before the petition was filed. The company had recently changed ownership and employees were uncertain about the new leadership - this uncertainty led them to the doorstep of the Teamsters.

The campaign was conducted primarily through the use of employee meetings and local supervisors. Our consultant spent a lot of time coaching the young supervisory team and helping them improve their communication skills. The Teamsters held employee meetings and visited employees at home, making the typical promises of big wage and benefit increases.

We showed employees copies of documents like the Teamsters constitution, by-laws and failure to represent charges against the union to prove that the Teamster promises were not true. Ultimately the employees overwhelmingly rejected the idea of Teamster representation. 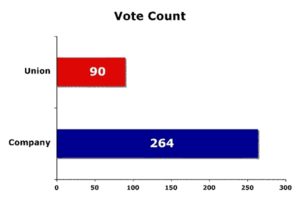 This was a very large unit (nearly 400 voters) of casino employees. The Hotel and Restaurant employees and the Service Employees jointly sought to represent the employees.

Given the size and scope of this unit communicating to employees was very challenging. In this campaign, we used a combination of video presentations and meetings conducted by registered persuaders. As in any campaign, we also worked hard on engaging the supervisors at the property. We provided the company leaders with documents and handouts to show employees that the promises being made by organizers simply weren’t true.

The unions used a number of anti-corporate campaign tactics including picketing the property, engaging local politicians and storming the property with busloads of union supporters.

Ultimately employees rejected the union and its disruptive tactics in resounding fashion.

NOTE: Due to the sensitive nature of these interventions, the company identity is kept confidential. If you would like to learn more or wish to arrange a discussion with the actual client, please contact Phil Wilson at 800-888-9115.