The Revolution Is a Made For TV Movie 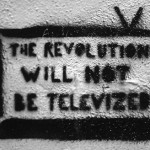 To hear the televised media go on about it, thousands of disaffected starry eyed American twentysomethings (from Brown, Columbia and beyond!) spontaneously mass aggregated in lower Manhattan and, in a historic shared awakening of some primal (if utterly hypothetical) working class outrage, became the Occupy Wall Street protest movement. With no particular goal, no visible leaders nor a triggering event to better define or understand them, the OWS protestors are being breathlessly compared to Arab Spring students who risked a heck of a lot more than a bad hair day to change the world.  And never mind that this latest “grassroots” uprising has been covered in big sticky union fingerprints since the earliest planning stages.

As the media (and other union mouthpieces) prefer to tell it, unions just last Wednesday or so first became aware of the Wall Street protests (maybe when every other union organizer in the country asked for the week off) and were quickly swept up into it by the sheer power of the message (what message?) and the magnitude of the moment. “These young people on Wall Street are giving voice to many of the problems that working people in America have been confronting over the last several years,” gushed Larry Hanley, international president of the Amalgamated Transit Union.  Meanwhile, other union leaders stepped up on cue and with similar wonderment (and at oddly coincidental labor forums) offered anything they could to help the nascient people’s revolution with deliveries beginning by day’s end of everything from food trucks to RN staffed first aid centers to fully functional websites to fully loaded downtown office spaces. 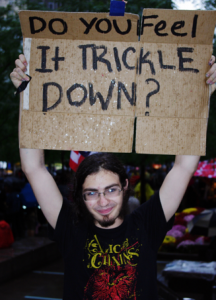 “I think you’re going to find, starting in the middle of September it’s going to sweep the country, that more and more people are taking action, more and more people in a non-violent heroic way will take the risk of arrest…We’ve got some stuff in Boston and New York that’s really going to be spectacular…. We can create a new world from the ashes of the old.”

That’s not some campus activist’s summer day dream, that’s SEIU’s top idea man Stephen Lerner last March at a labor forum detailing his plan to “create a crisis” that sure does sound more than a little like the Wall Street Uprising.  “We actually need to think about how we are heroic, how we operate out of the highest moral place… We’re not going to convince the other side we’re right through intellectual argument.” Well, he got that right.

Meanwhile, back on the sidewalk, a nineteen year old who believes he was carried to that very spot on the teeth of some epochal groundswell of revolutionary will, hands out flyers about Wall Street types who “strip employees of the right to negotiate better pay and safer working conditions.” And the website Occupy Wall Street, under the banner of a clenched fist, has published (with disclaimers) 13 Demands and when you strip out the really whacky demands like “complete debt forgiveness,” “free tuition” and “universal healthcare” you are left with six demands written by and for organized labor, just not from it. 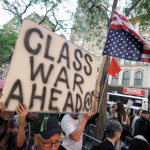 So, if you’re ready to unleash your inner hero (from a high moral place of course) and you agree that the only good wealth is collective wealth the moment is NOW to get behind these bold young people and do your part to overthrow the American economic system(and restore collective bargaining rights) by signing up here. Pass it on!