It’s been a week since the Supreme Court ruled 5-4 that state public sector unions may no longer compel employees to pay money to them as a condition of employment. As I said last week, this is the most important labor decision in the last quarter-century. Maybe even the last half-century. It’s big.

Unions have wasted no time thrashing the decision and laying out their game plan to blunt its impact. The blowback has been a call to arms on two fronts.

First, many commentators urge workers and unions to use Janus as a rallying cry to support more “worker-friendly” candidates. The upshot of this line of attack is that Janus is the result of unions mis-spending all of the political contributions they’ve made over the last several decades. Instead of spending all that (coerced dues) money on worker-friendly candidates like Bernie Sanders, unions have sold out and supported the wrong candidates.

These commentators view this as the time for unions to rise like a Phoenix out of the ash-heap of wasted dues money. They look at the wave of teacher strikes over the last year as evidence that workers are ready to revolt and push the re-set button. We don’t have that long to wait to see if they’re right. November’s congressional elections could have a monumental impact (especially after last week’s announcement that Justice Anthony Kennedy is stepping down from the Supreme Court).

I find this line of attack pretty amusing. First, it’s exactly what Justice Alito criticized about the Supreme Court’s 1977 Abood decision. Billions of dollars of forced dues money were spent on the wrong candidates? Unions contributed to candidates who weren’t aligned with the goals of their own members? That’s exactly the reason Alito found that forcing people to pay for this political speech – as a condition of their employment no less –  was unconstitutional.

Also, I happen to live in one of those states where teachers rose up and fought for increased pay and school funding. Whatever your position about this wave of activism (and as the son of a retired school teacher I sympathize with the teachers) these protests were anything but a giant endorsement of unions. Most of them happened in spite of unions. If anything, they are further evidence that forced unionism ends up making unions weak and unaccountable. Janus got it exactly right.

The second reaction is from union organizers themselves. Their reaction is that Janus should not be surprising. The main thrust is that now is the time to galvanize current members and organize like mad. One playbook suggests that the proper reaction to Janus is to organize now, be diligent in your representation of workers, and to be politically active with candidates who fully support the issues important to working people. In other words, do the work your union members pay you to do in the first place. Hmm. Seems like if unions had done that most of the criticisms outlined in Janus wouldn’t be around. 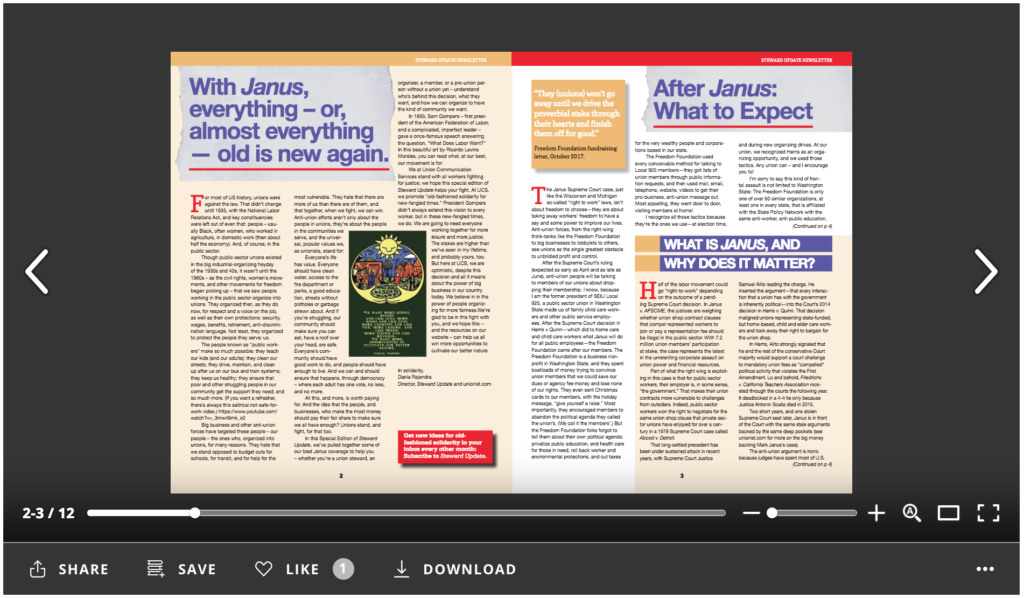 Steward Update: What to Expect After Janus

Since the Janus decision we also have seen a number of lawsuits by union members asking for a refund from all this wasted – and forced – dues money. It is very likely that these lawsuits will disgorge a lot of forced dues money from unions. It is also likely that private sector workers in non-right to work states will be able to make similar appeals based on the Janus decision.

In Janus v. AFSCME the Court found that public sector labor unions are now required to have clear permission (basically a waiver of first amendment rights) to collect fees from employees it represents. But the decision also raises serious questions about whether the agency-fee payer model in place in every non-right to work state is workable.

In the decision the Court stated that the agency-fee model outlined in Abood (which is also used for private-sector workers in non-right to work states) is inherently unworkable. The Court suggested it is nearly impossible for employees to exercise their right to stop paying for speech they find objectionable.

I believe many private sector workers who are forced to pay dues to unions (also presumably in violation of their first amendment rights) will also seek to keep their money. Hopefully this will discourage unions from seeking state protection (like they already have in California) to prevent potential objectors from learning about their free speech rights under Janus.

The reactions to Janus from both the political commentators and unions themselves are predictable. They also prove that all the justifications for overturning the Abood framework were spot-on. What remains to be seen is whether unions will actually walk their talk. I’m not holding my breath.