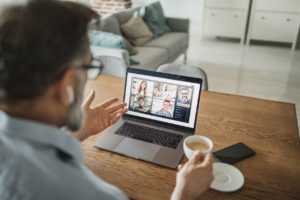 The Storm Before The Storm

Have you picked up any new routines during the COVID-19 lockdown? I have. I’m (slightly) more active, walking a lot more and doing a workout challenge. I knocked a few books off my reading list. Been doing a little work on my chess. And I’m eating at home with my family (and sleeping in my own bed!) every night.

As a company we’ve also picked up some new routines. We meet more regularly and communicate better than ever. We are better connected with our clients, consulting partners, and the broader labor and employee relations community. While I do get tired of Zoom meetings, I believe that the challenges of the last couple of months have forced us to innovate and execute in a way we never have before. We are already a better company, and we’ll only get better.

The latest book I’m reading is called Pale Rider, about the Spanish flu pandemic of 1918. You may wonder if I’ve lost my marbles with that pick (like there’s not enough pandemic analysis out there?). I’m reading it now because in a very real way we are reliving that experience. And I hope to understand how the world changes on the back side of this pandemic.

It is eerie the number of similarities in the way we are handling the current pandemic and what happened in 1918. All of the arguments we’re having now about reopening the country, especially things like churches, sporting events, and theaters, they struggled with in 1918. Certain parts of the country recovered at different rates than others. The country (and the world) faced three waves of pandemic and the pandemic changed a lot of our institutions forever.

Last month I focused on examples of how unions are taking advantage of the COVID-19 crisis. This month I think it’s important to think about how the labor relations world will change as we come out of this crisis. Unions clearly believe – and there is a lot of evidence to support this belief – that the aftermath of this crisis will create the greatest organizing opportunity in nearly a century. Perhaps the greatest opportunity ever.

The best article I’ve read on this subject is by veteran labor relations reporter Steve Levine. Levine’s argument is that the pandemic isn’t a limited moment in time where organized labor has the upper hand for a year or two. Instead, this crisis will shake the economy and our institutions to their core. Income inequality was already a major issue in the country before the pandemic – this crisis highlights that gap like never before. Many companies won’t survive. Massive numbers of people will be unemployed. Working people have more sympathy than at any time since the Great Depression. People’s expectations about the proper role of government are changing.

The seismic shifts of this crisis will impact every corner of the economy. The global economy has come to a screeching halt, leading to financial pain not seen since the Great Depression (and very likely worse than that). And this is just the beginning.

In 1918 the initial wave of the pandemic appeared to be a bad flu season. But it’s very unclear how today’s pandemic compares to the one in 1918. Is this just a really bad flu season that we overreacted to? Or is it wave one of a multi-year pandemic, like the one in 1918? It was the second wave of infections that killed somewhere between 2 and 5% of the global population (nobody really knows). There are many reasons that second wave was so deadly (especially the end of World War I), and the optimist in me senses that the fall wave of this pandemic won’t be anything like 1918. Either way, the economic fallout will be with us for years.

Worker activism – often without the help of unions – was on the rise well before this crisis. During this crisis unions are taking advantage of these situations in a way that they never have before. They are looking for opportunities to provide resources and support to protesting workers. They are connecting workers to local resources in anticipation of future organizing. They are gearing up for nationwide strike actions as well – May 1st will be the first of what I expect will be many attempts at a general strike.

Unions are also using this opportunity to make inroads with groups that have been very difficult for them to organize as our economy shifted to a primarily service-oriented one. They are going after tech workers, gig workers, along with many of the groups they traditionally represent. In addition, they are connecting political activism (especially the progressive wing of the Democratic party) to union organizing with an intensity that I’ve never seen before.

What does this mean for companies? I think Levine’s article lays out a few of the high points. The actions companies take during the pandemic will be watched carefully. The efforts they make to take care of (or not take care of) their teams will be watched. Does management authentically show concern for the safety of the team, even when they cannot guarantee it? What actions are they taking to protect their essential workers from infection? When sacrifices are required, are they shared between executives, shareholders, and the front-line? How much do they consider the plight of their teams as they face a lot of Hobson’s choices about their businesses? And how well do they communicate about what’s happening?

Unions cannot “solve” any of these issues. There is a global supply problem with PPE, food, and other essential goods. Unions can’t fix these supply problems and often make them worse. Union members were no better prepared for this crisis than any others. But that’s not really the point. Organizers are masters at taking any situation and using it as a proof point for why unions are needed or how they got something that proves their value.

Over the last few decades these organizing tactics were pretty easy to defeat. The vast majority of employers treated employees well and when organizers painted management as evil it didn’t really fit with the experience of most workers. Only the worst situations seemed like a union might provide an answer. Today is different. Whether unions can actually deliver anything is almost beside the point. Today people are desperate for hope and don’t see a lot of good options. Even a bad option seems like a good option. And in that environment the typical organizing tactics will work. Unions haven’t gotten any better – they’ve just arrived at their moment.