How To Fight the SEIU: Devil At My Doorstep

“The Devil At My Doorstep” has a fascinating subtitle: “Protecting Employee Rights.” 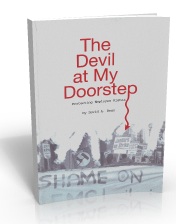 How to Beat the SEIU in an Anti-Corporate Campaign

That subtitle explains a lot about the book’s author, David Bego. More important, it explains a lot about why David Bego pulled off something that doesn’t happen as often as it should. He kicked the SEIU’s butt in an anti-corporate campaign. His book gets my highest recommendation (order your copy at a special price for INK subscribers).

David Bego is a self made man. He built a national building maintenance company from literally nothing. His company, EMS, employs more than 5,000 people across the US. After reading the book you feel like you know Dave - an honest, religious man who considers not just his immediate family, but his extended work family, in everything he does.

The fact that Dave’s employees stood beside him throughout a terrible battle with the SEIU is testament to this relationship. It is a great example of the Golden Rule: treat employees as you want to be treated - they will probably treat you back the same way. And that is exactly what happened at EMS.

What I found most admirable was Dave’s position on unions. Dave actually had a history of working together with unions. He didn’t reject the SEIU’s demands as some sort of knee-jerk reaction. Instead he held to a very simple principle: that his employees should have the chance to decide for themselves whether they wish to be represented by a union. The SEIU would not stand for it, and so began the multi-year campaign that cost Dave’s company more than a million dollars and massive emotional strain.

Dave’s book isn’t “polished,” which I suppose might bother some readers. I actually think that is part of the charm of the book – you can tell that it is just Dave telling you his story. As I said, you feel like you really know him when you finish.

The only nit that I’d pick with the book is that Dave cuts away from his story occasionally to talk about politics, the Employee Free Choice Act and the NLRB. But I knew I was really getting into the book when I found myself hurrying through those sections (probably because I deal with that stuff every day – for non-experts that material would probably be real interesting too). I wanted to find out what happened next in the anti-corporate campaign.  It really is a page-turner at times.

I won’t detail the amazing story of EMS and its battle with the SEIU any further here. If you want to learn more about that you should buy Dave’s book (INK subscribers can get a discount by purchasing here). There are very few labor texts from the perspective of management, and this story is gripping. Again, I highly recommend it.