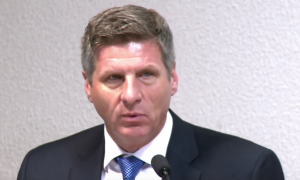 It appears SEIU Executive Vice President Scott Courtney comes from similar stock as now defamed Hollywood mogul Harvey Weinstein. The architect of the Fight For $15 campaign was suspended by Mary Kay Henry in early October for reasons undisclosed at the time. Sexual harassment appears to be the prime mover, as “seven people who have worked with Courtney, including current and former SEIU staffers, told BuzzFeed News the top official had a history of sexual relationships with young women staffers — who were subsequently promoted.”

It appears that Courtney bred a culture of abusive behavior among the Fight For $15 staff, as the continued investigation led to additional house-cleaning. Caleb Jennings, the head of the Chicago Fight for $15 effort, was fired for “complaints related to sexual misconduct and abusive behavior towards union staff,” and Mark Raleigh, the head of the Detroit effort, was placed on administrative leave for similar reasons.

As usual, the union protects it’s own for as long as possible (think Tyrone Freeman). Back in June, more than 50 Fight For $15 staffers sent a letter to Henry complaining of the abuse. According to another former Chicago SEIU organizer - who requested anonymity for fear of retaliation from within the labor movement! - many female ex-staffers felt traumatized after working with Jennings as well as with other subordinates of Courtney. Other staffers have alleged that Courtney protected Jennings and Raleigh.

Of course, the culture of being “above the law” stems from the very top of the SEIU. Recently the union tried to make the case before a federal appeals court that the union should not be subject to a state law against bias.