As the Democratic 2020 presidential contenders begin tossing their hats in the ring, it’s a good time to for a quick update on union political spending.

According to the nonprofit National Institute for Labor Relations Research, which collated data from multiple sources, Big Labor political spending in 2018 was up over $300 million from 2016, to more than $2 billion. Since 2016 was a presidential election year, this means unions have been focusing at the local level, and the recent spate of right-to-work law efforts have been partially responsible. 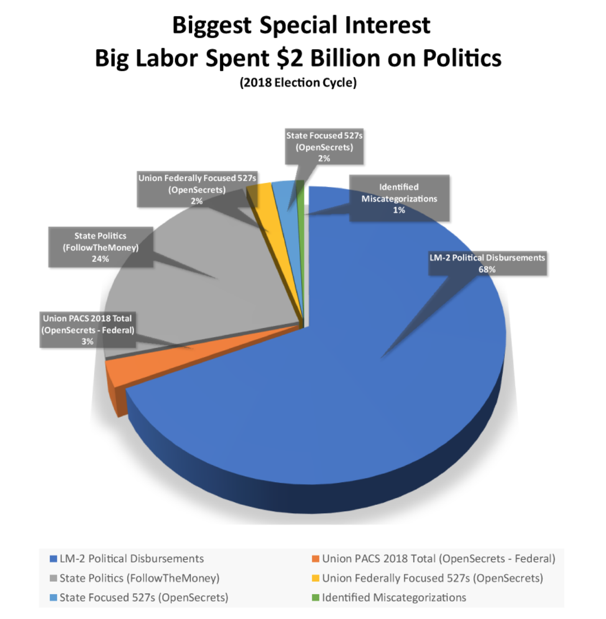 The AFL-CIO, though not actually a union, allocated only $5 million to spend on organizing activities in it’s 2018-2019 budget, as opposed to $40.6 million to spend on “political, electoral and issue mobilization.” The head of the AFL-CIO, Richard Trumka, has come under criticism, both internally and externally, for his seeming lack of interest in organizing, and in fact there is growing animus between current and former AFL-CIO staff and their leader. Several former AFL-CIO officials have now gone public with their criticisms of Trumka.

The wearers of all those hats in the ring are going to have some explaining to do. Big Labor is looking for a champion, and still feels the sting of Hillary Clinton’s less-than-stellar connection to labor in the 2016 race, which some would say tipped the scales to Trump. Some of the front runners are courting unions hard, but the Big Labor endorsements are not likely to come quickly.