The Senate has voted to advance the nominations of current NLRB members Marvin Kaplan and Lauren McFerran to additional terms. If confirmed, this still leaves one unfilled Democratic seat on the board. 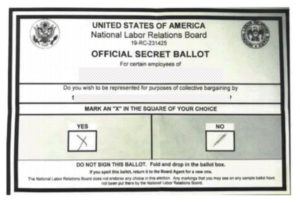 One bright-line rule to come out of the pandemic crisis relates to stray marks on mail ballots used for union elections. The board, calling the history of past rulings inconsistent, established the simple rule that a ballot containing marks in more than one box is void, eliminating the need to interpret “voter intent.” The board also made the rule retroactive, and in an effort to make it clear to voters that more than one mark could invalidate their ballot, added the following language to the ballot: “If you submit a ballot with markings inside, or anywhere around, more than one square, your ballot will not be counted.”

Speaking of bright-line tests, the board realigned its jurisdiction determination for religious educational institutions to the D.C. Circuit standards. In the condensed version of the story, the board will now follow the University of Great Falls three-pronged test to determine whether or not such an institution falls under the jurisdiction of the NLRB. According to Great Falls, if the following three elements were satisfied, then the Board must decline to exercise jurisdiction: The institution:

The board broadened solicitation policies restrictions by removing the requirement that a union authorization card be present during a conversation. In Wynn Las Vegas, the board declared that an employee engages in solicitation “where an employee makes statements to a coworker during working time that are intended and understood as an effort to persuade the employee to vote a particular way in a union election.”

The NLRB upheld T-Mobile’s ban on the use of company email for union organizing.

NLRB General Counsel, Peter Robb, issued a guidance memo regarding the collection of evidence in unfair labor practice investigations. The memo addresses the handling of different types of witnesses (active witnesses vs. fact witnesses) as well as audio recordings.