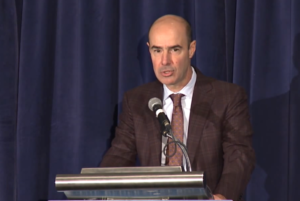 At the end of September the Senate confirmed Eugene Scalia as the new Labor Secretary. The son of deceased Supreme Court justice Antonin Scalia was confirmed by a vote of 53-44, along party lines.

The National Labor Relations Board set a 2022 goal of reducing its case processing time by 20%.  As of the end of September (the NLRB fiscal year), they had already achieved a 17.5% time reduction.  The average time from the filing of an Unfair Labor Practice (ULP) to final disposition has dropped from 90 to 74 days.

The NLRB extended the comment period on proposed election rule changes, moving the close date to December 10th. If you missed it the first time we posted, and/or still want to comment, go here.

The Department of Labor settled on a mandatory overtime threshold of $35,000, moving up from the $23,600 standard set by the George W. Bush administration, yet under the $47,000 mark attempted by President Obama. The new rule will take effect at the beginning of the new year.

In the spring of this year, an NLRB judge ruled that a T-Mobile internal program designed to collect gripes from call center employees was an illegal company-run labor organization, and ordered the group disbanded.  The Communications Workers of America were behind the push, complaining because the group was thwarting their efforts to unionize workers. A three-member NLRB panel overturned this ruling on September 30th, declaring the T-Voice program is not a company-controlled union, and that the group functioned simply as a “suggestion box” for worker concerns.