NLRB General Counsel, Peter Robb, issued two memos adding guidelines to the December 2017 Boeing decision, which established a new standard for evaluating workplace rules. In the memos, Robb explains that it is lawful to:

In Nuance Transportation, which elicited the memos, the GC found the following to be unlawful:

The NLRB has announced new rulemaking priorities, to include:

It is anticipated that the proposed rules will be made public in September. 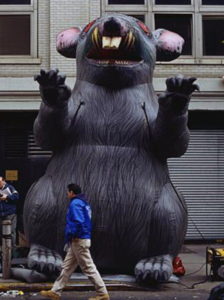 It looks like giant rat inflatables may no longer be considered lawful union speech (against a neutral party), but instead classified as picketing, and thus illegal. When a Chicago IBEW local hung some banners and set up an inflatable “Corporate Fat Cat” balloon, the NLRB General Counsel pressed the board’s Chicago office to issue a complaint. In his advice memo, the GC said the banner was a “functional equivalent” of a picket sign, and by having it next to the inflatable rat, the union was picketing a neutral employer, thus violating Section 8(b)(4) of the National Labor Relations Act. The parties informally settled the matter, so the board will have to wait for another opportune time to prosecute the issue.

Early in his tenure, President Trump used an Executive Order to initiate an overhaul to the apprenticeship training system, reducing government oversight and allowing industry to set the standards and handle certification. No proposed program has yet emerged, but drafts of the plan indicate that parameters for the third-party program certifiers would largely remove the Labor Department from the certification equation. Labor Secretary, Alexander Acosta, favors excluding the building trades from the new program, siding with the unions.

The overtime storm created by the Obama administration hasn’t abated yet, as both the House and Senate passed bills aimed at codifying new overtime levels as originally proposed ($51,000), rather than accept the DOL’s more reasonable target of $35,308. It is unlikely the congressional initiative will become law in the current administration.