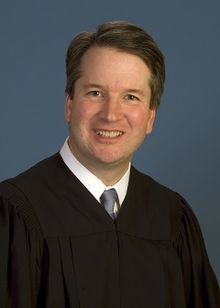 The addition of a new member to the Supreme Court always has ramifications for labor. In general, as a conservative, Trump nominee Brett Kavanaugh has a pro-business record, and according to this detailed profile, “Kavanaugh generally brings a pragmatic approach to judging, although his judicial philosophy is conservative, and he has applied principles of textualism and originalism espoused by the late Justice Antonin Scalia.”

Relative to NLRB/DOL issues, it may be that “Kavanaugh is clearly inclined to resist the expansion of administrative-agency authority, but he has tended to approach administrative law issues on a case-by-case basis, rather than by mounting a frontal attack on the doctrine of deference to agency interpretations of ambiguous statutes.”

Fast food restaurants played heavily in other labor news recently. A Fifth Circuit Appeals Court decision upheld the right of In-N-Out Burger employees to wear “Fight for $15” buttons at work, while a District Judge in Chicago ruled that Jimmy John’s would not be held responsible as a joint-employer for labor law violations by franchisees.

McDonald’s is not quite off the hook in their joint-employer case, as an NLRB Administrative Law Judge rejected a proposed settlement to a case attempting to hold the company responsible for the firing of franchisee employees who were campaigning for the “Fight for $15” movement.

Meanwhile McDonald’s and six other fast food chains have agreed to drop “no poaching” clauses that prevent employees from moving across various franchises. Such clauses prevent managers from hiring workers at another store in the same chain, and eleven state attorneys general and several senators are working to eliminate the practice.  Seven additional fast food chains are under scrutiny, and about 90 CEOs will be receiving letters from Senators Elizabeth Warren (D-MA) and Corey Bookey (D-NJ) asking them to disclose their “no-poaching” clauses. They have also introduced legislation making the practice illegal.

The Obama-era “Persuader rule” is officially dead, having been rescinded by the DOL on July 17th.  The LMRDA reporting requirements and advice exemption are now as they existed before the 2016 rule.

It has just become easier to violate an employee’s Wiengarten rights, even if the employee doesn’t specifically reference the rights by name.  In Circus Circus Casinos, Inc. d/b/a Circus Circus Las Vegas and Michael Schramm, the board upheld an ALJ’s decision that the company violated an employees rights due to the nature of a conversation that should have been construed to mean that the employee attempted to obtain the help of the union during a disciplinary discussion, during which a union representative failed to appear. The Board declared that

Gig economy companies such as Uber and Lyft took another hit in the contractor vs. employee debate, this one coming from the New York Unemployment Insurance Appeal Board. The board ruled recently that Uber was responsible for the unemployment benefits of three drivers, along with others who are “similarly situated.” The New York Taxi Workers Alliance represented the three drivers in the case.

The NLRB is attempting to funnel more ULP disputes into their alternative dispute resolution (ADR) program. The program has existed since 2005, but was only accessed if one of the parties requested participation in the process. Under a new pilot program, the NLRB’s Office of the Executive Secretary will actively contact parties with unfair labor practice cases before the Board and inform them of the option of using the ADR program.