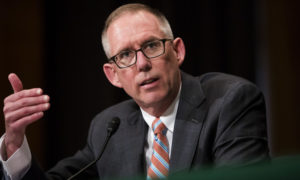 The National Labor Relations Board is back to full strength with the confirmation of John Ring. Additionally, Ring replaces Kaplan as the board chair. Ring’s confirmation brings the board to a 3-2 Republican majority.

NLRB General Counsel Peter Robb filed a motion asking the board to withdraw its decision vacating the Hy-Brand ruling, just prior to Rings confirmation. Once Hy-Brand is decided, the D.C. Circuit has indicated it will take back up Browning-Ferris, so joint employer questions will hopefully be resolved soon.

Congress funded the board equal to last year’s measure with the omnibus spending bill passed in March, prompting the union representing the NLRB staff to request General Counsel Peter Robb to reconsider reorganization plans. No word yet on further action.

Democrats in the Senate succeeded in stalling a bill that would have exempted tribal businesses from the NLRB, with Republicans falling 5 votes short of being able to cut off a filibuster.

Democrats in three states are leading the way in trying to circumvent a potential Supreme Court ruling against forced dues when it rules in the Janus case later this summer. The schemes for preventing employees from opting out of paying dues take various forms, including demanding employers automatically deduct unless the employee requests otherwise and severely limiting the time window in which an employee can opt out.