The Real Costs of Union Labor 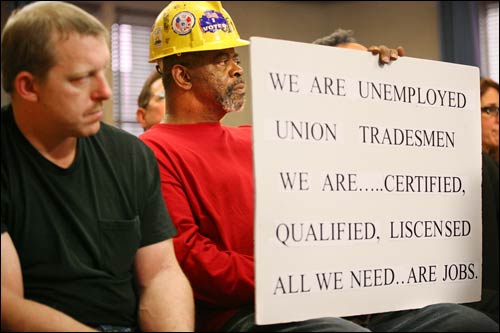 According to the NY Post this week, union wages and benefits aren’t the only reason private contractors in NYC are avoiding the use of union construction labor.  The real cost of union labor is in the entanglement of work rules, featherbedding, unproductive practices and jurisdictional disputes that slow down and often halt work while non-union sites are free of these problems.

“Quarrels between unions over jurisdiction — which crafts are entitled to perform which tasks — have been bitterly contentious since the start of collective bargaining. Iron, steel, glass and reinforced concrete — the basic materials of any skyscraper — all became targets of early battles that continue today.

Plasterers, bricklayers and cement finishers fought among themselves over laying the concrete; lathers and ironworkers fought over reinforcing bar (rebar). Then innovation last century ushered in arguments between carpenters and sheet-metal workers over installing metal window frames, doors and trim.”

These inter-union conflicts have prevented the introduction of innovative cost-saving techniques and have driven expensive sabotage and vandalism by warring unions.  In sharp contrast, contractors who employ non-union labor are free to choose equipment, materials and tools, move work between craft units and choose whether or not to build components off-site.  Union free contractors are also free to stagger work shifts and use a forty hour work week to calculate overtime.

According to Julia Vitullo-Martin, a senior fellow at the Regional Plan Association, if unions would agree to end all turf wars and accept a few simple work rule changes, union labor would cost only 10% over non-union labor and thousands of unionized construction workers could be put back to work.