A seventy page official “Corporate Campaign Manual” has surfaced as court discovery in the Federal RICO suit filed by Sodexo against SEIU.   Most of the manual is old news but the section titled “Pressuring the Employer” does lay out a plausible frame for racketeering activity.

“Outside pressure can involve jeopardizing relationships between the employer and lenders, investors, stockholders, customers, clients, patients, tenants, politicians and others who the employer depends on for funds. Legal and regulatory pressure can threaten the employer with costly action by government agencies and the courts.  Community action and the use of the news media can damage an employer’s public image and ties with the community and its organizations.” 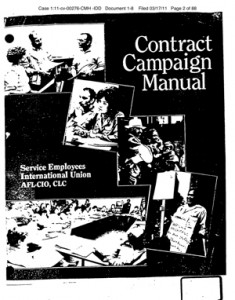 The document then goes on to explain how to develop and plan pressure tactics in what seems to amount to a call for economic terrorism. “The threat of action often has more psychological effect on management officials than the action itself because they don’t know exactly what the impact will be.”

The manual also contains a checklist to evaluate tactics. Does it reduce productivity?  Increase costs?  Affect a private company’s image or relationship with political decision makers? Does it directly effect the careers of members of management? Distract management from work they need to be doing to keep the business viable?  Publicly embarrass them?

And if a proposed tactic might break the law?   “Union members sometimes must act in the tradition of Dr. Martin Luther King and Mohatma [sic] Gandhi and disobey laws which are used to enforce injustice against working people.”