One Out of Ten Teamsters Vote Hoffa 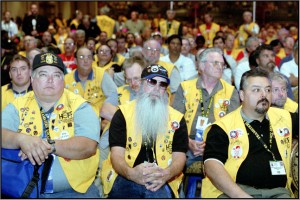 The campaign drew unusual media attention for a union election and was remarkably ugly, even by Teamster standards.  IBT president James Hoffa spent over $3M on his reelection, the union itself spent millions more to get out the vote and Sandy Pope logged thousands of frequent flyer miles running from union hall to union hall. Yet even with Bill Clinton and Danny DeVito making GOTV robo-calls only 18% of those eligible to vote bothered to toss their ballot in the mail last month. As such, even while Hoffa beat his opponents handily he did so with the support of only about 1 out of 10 of the 1.3 million dues paying Teamsters.

Hoffa enjoyed several obvious advantages coming into the election including totalitarian control over the union’s convention this summer, his IBT president’s travel budget and hefty name recognition.  Add to that the power of incumbency says Gary Chaison, a professor of industrial relations at Clark University. “The power of the incumbency in the Teamsters is great, because of the patronage system and the notoriety, and the ability of the Teamsters leader to make it seem that any of the criticism of the union is weakening the union.”

The anemic turnout didn’t stop Hoffa from re-framing the moment like the consummate union professional that he, of course, is.  “This is a vindication for everything we’ve worked for.  We’ve worked to keep the union strong during the worst economy in 80 years.” Hoffa also called his election win “a victory for all working Americans who are fighting to save America’s middle class.”