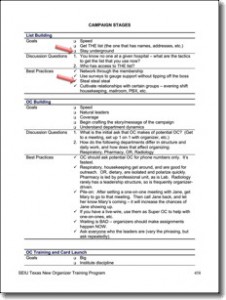 Campaign underground and “steal, steal, steal.” At least that’s how organizers were trained to do it in Craig Becker’s SEIU.

Last week we started fact-checking arguments from the union movement and the NLRB (these days it is hard to tell them apart) in favor of quickie elections and we crushed the claim that unions are winning more elections simply because they withdraw more petitions. As it turns out unions withdrew fewer petitions in 2010 than at any time in the last 20 years.

Today we will take on another lie used to support the NLRB’s proposed election changes. One reason companies object to “quickie” elections is that unions typically run “underground” campaigns for months, collecting union cards before the company is even aware that an organizing campaign is happening. And unions would prefer that once an NLRB petition is filed companies have just a few days to respond to their underground campaign.

But the NLRB is skeptical. Craig Becker, who before becoming a member of the NLRB was Associate General Counsel for the Service Employee’s International Union, took issue with the claim that union organizers try to keep campaigns quiet for as long as possible. The Wall Street Journal explains:

Board member Craig Becker, a former union lawyer who holds his seat thanks to a recess appointment, challenged a management lawyer’s charge that unions begin covert organizing campaigns long before the election process officially starts.

“Are you aware of any evidence of how often that occurs, or when the parties begin their campaigns?” Mr. Becker asked. The lawyer offered anecdotal evidence but no broad studies.

This tactic isn’t so foreign as Becker would like us to think. Take this example from an organizing training guide published by the AFL-CIO called The Blitz: A Manual for Organizers on How to Run Fast-Paced Pre-Petition Campaigns:

The critical information an organizer must obtain first is a list of the names and addresses of the employees. This often is a slow, meticulous process, sometimes taking weeks or even months. In order to gather this information, the organizer may have to work with one or more contacts within the workforce - but these contacts should be instructed not to talk about the union with anyone while the preparation phase is underway (page 6).

The Blitz isn’t describing a little-known organizing technique by some avante garde organizer. The Blitz describes a strategy developed by former AFL-CIO Organizing Director Richard Bensiger. Another well known union organizer is Harry Kelber, long time editor of The Labor Educator. In Kelber’s A Training Manual for Union Organizers: A New Organizing Strategy for the 21st Century he calls this early phase of the campaign “underground organizing.” Kelber writes:

“Underground” Organizing: At the start of a campaign, some organizers try to get as much advance information as they can about the plant, its management and its workers. This can be helpful, but fairly soon the employer will get wind of the fact that the union is in town and prepare a counter-attack. It is important for the organizer to have an initial announcement of the union’s presence when he is ready to go public (page 54).

These tactics aren’t just limited to training manuals. Union websites also educate employees interested in organizing their company to make sure the keep the organizing activity “underground” as long as possible. For example, this Communications Workers website warns in-house organizers:

When talking among yourself [sic] about a union, be sure to talk only while you are on breaks, away from work areas, or off company property.  Organizing a union is legal and a protected right under the law, but you need to avoid tipping off management as long as possible. If your employer finds out, especially when you are in the beginning stages of identifying key workplace issues and building union support, your road to success will be much more difficult.

Another common union organizing tactic is “salting” an employer, or sending a skilled union organizer to apply for a job at a company where he or she can secretly begin organizing a union from inside the company - again without notice to the employer. Here is a description of “salting” from the Electrical Workers, who regularly use the tactic:

“Salting” is the deliberate act of getting a job at a specific workplace with the intent to organize a union. Most union campaigns start with a lone individual or small group of individuals with no union experience deciding to organize a union from scratch. Sometimes, a union campaign can be strengthened if you know of a friend with union organizing experience. By applying for open positions at your workplace, your friend can secretly help you organize your workplace. … This doesn’t mean that the salt gets a job and immediately starts talking union. An in your face blunt approach such as that not only tips off the boss, it usually alienates potential union contacts among the rank and file workers.

The Massachusetts AFL-CIO also warns workers to keep their organizing campaign as quiet as possible:

Once you have decided that you would like union representation, the first step is to talk to your co-workers and gauge their interest in forming a union. If they have specific complaints, educate them on how a union can make a difference. There is no need to approach your employer about your decision to pursue representation. The more support you can gather before your employer is aware, the better. This gives them less time to prepare their anti-union campaign. 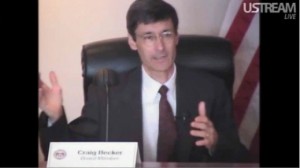 Not Sure "Underground" Campaigns Happen? They Did Under Becker's Watch

Finally, and most important, it is worth noting that the SEIU, Becker’s former employer, also trains its organizers to engage in “underground” campaigns against employers. In fact in 2007 - when Craig Becker was Associate General Counsel for the SEIU - the SEIU was training organizers in its WAVE program on the different stages of an effective organizing campaign. This training included keeping the “list building” phase of the campaign “underground.”

Oh, and another great tip they offer under “Best Practices” is to “steal, steal, steal.” Click on the image above to view page 458. If you are really ambitious you can download the entire 485 page WAVE training document here.