The End of Quickie Elections? Sort of.

If there is one thing we’ve learned during this pandemic, it’s flexibility. One day you’re working in the office. The next day you’re “sheltering in place.” Later – especially out here in flyover country – you’re heading back to the office (what reopening phase are we in now?). Then… well, who the heck knows?

Plans change so fast right now it seems more efficient to not even have a plan. That works out pretty good for me, since I rarely have one. Our team recently did a hilarious presentation where I had to make a “love connection” with a new business strategy. The first two strategic options were my typical ones: “flying by the seat of my pants” and “shiny object.” Luckily, I chose option three.

If you happen to have an active NLRB campaign right now you might consider “seat of the pants” or “shiny object” as your strategy. That’s because the situation is changing almost every day.

On May 31 the NLRB’s proposed rule on election procedure was supposed to go into effect. This is the procedural rule that revised and fixed a lot of the problems with the Obama-era “quickie election” regulations. On Saturday May 30, a U.S. District Court Judge stopped parts of the rule from going into effect in AFL-CIO v. NLRB, No. 20-CV-0675 (Order issued May 30, 2020 and Memorandum Opinion issued on June 7, 2020). That is twist number one.

The judge’s opinion was quite interesting. The basic issue was whether the Board had acted improperly by not putting this rule through “notice and comment” rulemaking. Instead the Board argued these changes were merely procedural and did not require the full, formal rulemaking process. The judge agreed in part with this argument. Several aspects of the rule were fine. Only parts of the rule would not go into effect without additional consideration. That is twist number two.

After all this twisting and turning, here is where we stand today (note: this may all change again as the litigation on the rule continues). First, the bad news. Below are the rules that were found unlawful and the parts of the quickie election rule that remain in effect:

The good news is that significant parts of the new rule are now in effect. As far as election timing, the most significant changes that are currently in place include:

These new rules are in place for any petition filed on or after May 31 and they add significantly more time for voters to consider their choice in an NLRB election. First, let’s look at a comparison between the Obama-era quickie election rule and the proposed rules that are in place today: 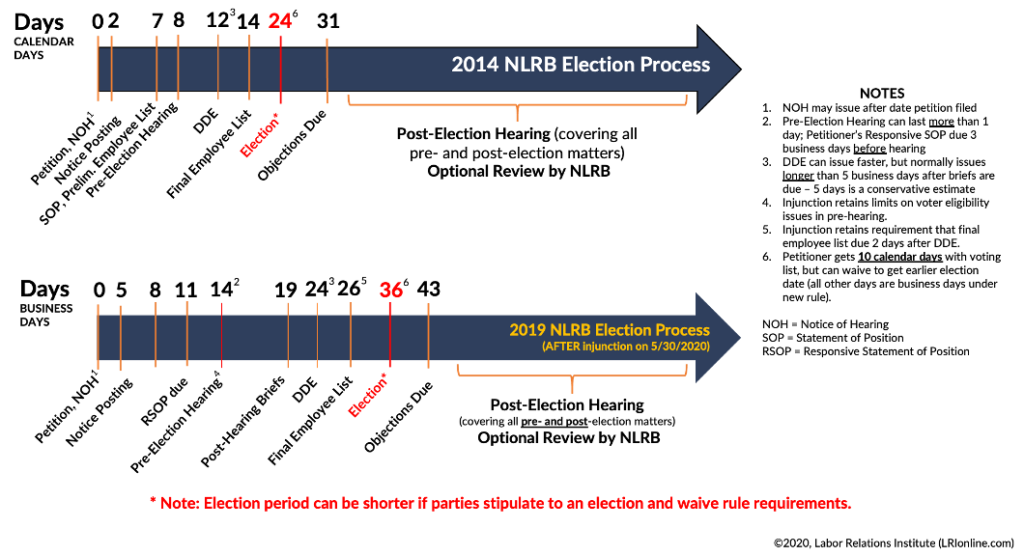 Around 12 more days were added to the election period under the current process. Compare this to the rules before the quickie election process went into effect in 2014. Before then the NLRB targeted most elections to occur no longer than 42 days from the date the petition was filed. The rule in place today gets the parties close to that 42-day target, and my guess is that in most cases where the parties go to hearing the actual election period will be longer than 42 days.

Another thing to remember is the new rules count everything by business days and not calendar days like under the old rule. This means that depending on when the petition is filed, the number of calendar days should be quite close to 42 days (there will be at least three weekends in there).

How does this compare to the full procedural rule if it had been allowed to proceed? Here is that comparison: 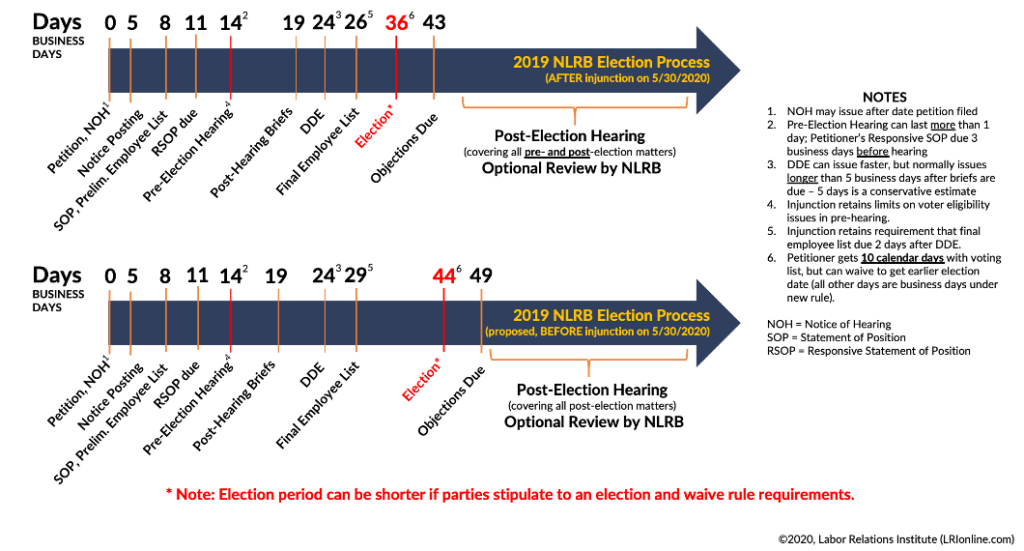 There is an eight-day difference between the current process and the proposed one (and the proposed rule is basically right on target with the pre-Obama era rules). The proposed change that accounts for this difference is the 20-day minimum between a Decision and Direction of Election (DDE) and the election date.

There is one other big difference if the proposed rule isn’t fully implemented. It impacts the number of cases that get to have a hearing in the first place. Under the ambush rule many unit determination issues are not litigated until after the election. That last statement deserves an eye roll emoji. It is criminal that this stupid “we’ll figure out who’s actually eligible to vote after the election” provision is still in place. Unfortunately, it still is.

The net of all this is that the quickie election rule is sort-of dead. The process changes that made it through are a substantial improvement over the ambush rule. Even if the Board is forced to go back to the drawing board on the other rules, these changes are important and welcome. They give voters significantly more time to consider both sides of the issue of unionization. And more time for me to go look for some shiny objects!