A few weeks ago I did a presentation (on Zoom, obviously) about virtual campaign communications during a world of social distancing. During that presentation I shared this chart, showing the topics I’ve been asked about most during the pandemic:

As you probably guessed, I live with a teenager.

The amount of time teens (and let’s face it, the rest of us humans) spend online is crazy. And the pandemic has dramatically increased this trend. While we take the first tentative steps back into meat-space there is no doubt that the vast majority of our interactions will continue to happen in cyber-space for the foreseeable future.

This raises an interesting question for unions. While most agree that unions today have the best organizing environment available to them in the last century, they too face the problem of access to potential members. And unions have had a pretty spotty record of leveraging technology to organize.

A fascinating, must-read article from In These Times explains the problem this way:

Reaching the next generation of union members means online organizing. It also means taking a much more flexible approach to organizing—one that does not restrict itself to only traditional union campaigns. The raw materials are millions of hard working, younger people who are at ease online, and who have the general political and moral tilt that would make them prime candidates for organized labor, but who don’t know much about unions, or how to connect their day-to-day work issues with what organized labor does. The attitude of traditional unions has often been that these working people should beat a path to their door. Instead, the labor movement needs to bring its tools to the people.

New entrants to the field include Unit.work and GetFrank.com. You should check out both of them. 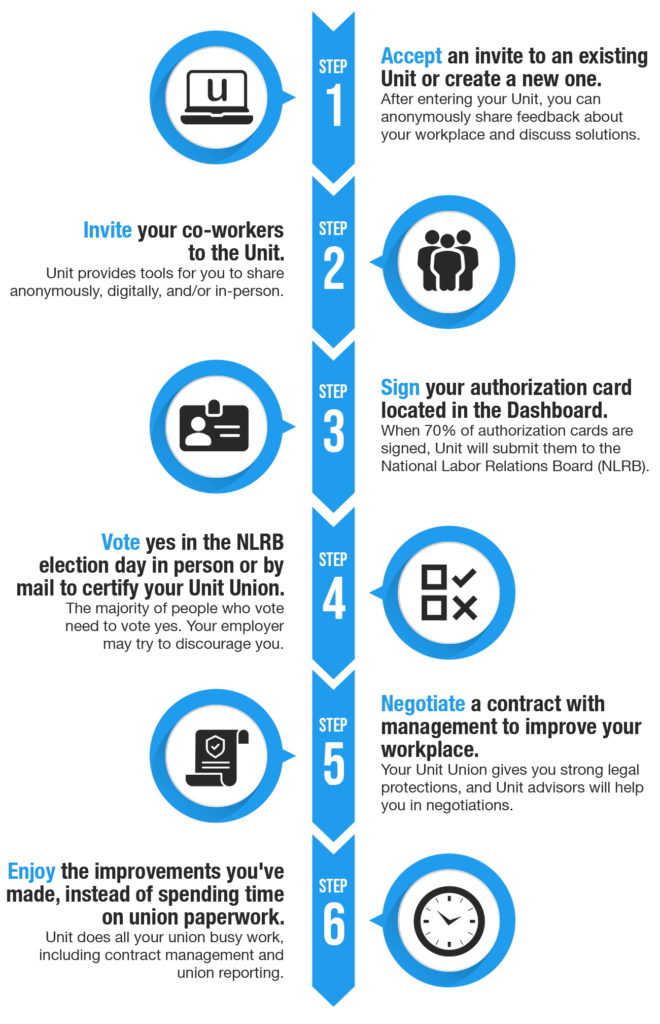 Unit.work, unlike Coworker.org, is designed to start union organizing campaigns. Once a group of employees sign up they receive help with signing authorization cards and forming an independent union in a workplace. If employees choose to organize a “Unit Union” (this isn’t required) they agree to pay 0.8% of their monthly earnings as a subscription, beginning as soon as the election is won. In exchange employees get support from Unit during the organizing effort and subsequent collective bargaining negotiations.

Unit.work describes itself as a for-profit, labor-side consulting firm. This is a fascinating model that attempts to reach workplaces and potential bargaining units off the beaten path of traditional unions. It is not affiliated with any union. But independent unions organized in this way are no different than “official” unions. There are no examples of success stories on the website, but we’ll be on the lookout for examples of units organized this way.

GetFrank.com is also a for-profit company that works on a subscription basis. Instead of trying to organize a union with collective bargaining rights, GetFrank allows a group of workers to anonymously make demands of the employer.

One problem I see with GetFrank’s model is that an employer is under no obligation to deal with a representative like this (and commits an unfair labor practice if they negotiate with a non-majority representative). However, the app says they won’t make demands with less than 75% support from coworkers and it is easy to envision an employer who refuses to bargain with a GetFrank unit will quickly face an NLRB election. This is another fascinating model.

Will traditional unions take advantage of these innovations? Historically they’ve been slow to adopt, but I think anyone reading this would say their use of technology over the last two months has changed dramatically. It is hard to see the world going back to the way it was before the pandemic, and I am sure that will be true of union organizing as well. The first two months of 2020 saw union petition activity surge over the same period in 2019 (according to LRIRightnow data, January RC showed over a 30% increase year-over-year). As the economy re-opens so too has petition activity. It will be interesting to see if unions begin leveraging technology like this as part of their “new normal” toolkit.