Is the PRO Act a Mate in One?

This week the NLRB issued its highly anticipated rulemaking on joint employer, overruling the controversial Browning Ferris decision. If you haven’t read through the 53-page final rule (and why would you – that’s what you’ve got me for) here are the highlights:

This thoughtful rule is the next salvo in the years-long battle over defining who counts as an employer under our labor laws. It will certainly be litigated, and it sets up a number of potential showdowns with states, administrative law judges, and other agencies. But it is a critical development (along with the Department of Labor’s rule issued in January). It provides much more clarity, especially for franchisors and gig economy companies who faced having their entire business model destroyed.

Up till now the joint employer issue has bounced around in a series of agency and court decisions, which get reversed when a new administration comes into power. This political back-and-forth is extremely frustrating for employers and their employees alike. For example, numerous groups of freelancers and so-called gig workers are suing to block California’s AB-5 statute from going into effect. That’s why the Ring Board should be applauded for getting these rules through and clarifying this critical issue.

Here is the problem. It’s true that a rulemaking is more difficult to reverse than an agency decision. However, it is far from impossible, as the Ring Board recently showed by rewriting the “ambush election” rule originally put in place by the Obama-era Board. While the playing field has shifted somewhat away from decisions and toward rulemaking, the game is being played basically the same. Each time the administration changes they just flip everything back to the way it was before. Rinse, lather, repeat. 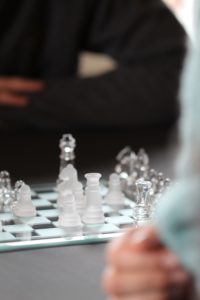 Photo by Anne Nygård on Unsplash

You’ve probably heard the saying that most people play checkers, but the most strategic ones play chess. In other words, checkers doesn’t require as much strategy or thinking ahead. You’re mostly just reacting to the last move of your opponent. When I think about the state of labor law today, I think both sides usually play checkers. Move, countermove.

However, Big Labor and their Democrat allies are playing chess when it comes to the PRO Act. Labor unions know they missed the best opportunity in a generation to revolutionize US labor law when the completely mis-named (but also cleverly named) Employee Free Choice Act nearly passed in 2009. They are now betting it all on the PRO Act, which has already passed the House. The PRO Act is literally every bad idea unions have come up with in the last 40 years to re-shape labor law in their favor. In addition to overturning the joint employer rulemaking, it includes card-check, gives unions access to company property, mandates arbitration of bargaining agreements and much, much more. This bill is going nowhere in 2020, but it has a significant chance of passing should the Presidency and US Senate flip in November.

The PRO Act or its key provisions are supported by every current Democratic candidate for the presidency. Big Labor has made clear that support for the PRO Act is a litmus test for their support in any political election. While hitting the trifecta may be a long shot, it is not impossible. We are in a completely different political environment. Sure, a Sanders presidency and a Senate flip is hard to imagine, but is it any less probable than a Trump presidency was 4 years ago? I don’t think so.

I love playing chess. If you’ve ever played (and even if you don’t know anything about chess) you probably know that a checkmate is the goal of the game – using a combination of your pieces to put the king in a position where it can’t move. A “mate in one” is where you can move one piece to deliver mate. To deliver a mate in one you have to position your pieces in a way that that last piece can deliver the crushing blow without being captured.

I look at the PRO Act this year as Big Labor and the Democrats moving their pieces around to prepare to deliver a mate in one. Gathering up the House co-sponsors (and going after those who oppose the legislation) and getting all the presidential candidates on board is the first step. Making clear that they learned the lessons of EFCA is another move. Unions have withheld full-throated support for Joe Biden in part because they felt the Obama administration fought for healthcare instead of EFCA.

The most important lesson employers should have learned from EFCA was how fast it went from bad idea that had no shot of passing to nearly becoming law. And with the Democrat presidential candidates debating on whether or not to get rid of the filibuster rule in the Senate (the only thing that prevented EFCA from passing in 2009) it is more likely than ever that a major piece of labor legislation could pass soon.

The only way to prevent a one move mate is to make sure you take away your opponent’s resources. You put obstacles in the way. You counter-attack. You move your king to safety. These are moves you have to make way in advance. Once the final attacker is in position it is too late to stop the mate – it’s inevitable. If the business community wants any hope of stopping the PRO Act then businesses must be making moves now. Right now I only see Big Labor making chess moves – the business community is still playing checkers.