The Real Impact of Ambush Elections

In just a couple of months we will have one year of experience under the NLRB’s ambush election rule making. This is one of the most significant changes in US labor law since… Ever. It has slashed the amount of time employees have to consider their decision about whether or not to choose representation. More important, it has fundamentally altered how decisions about who is included (and excluded) from bargaining are made.

But what are the actual “on the ground” differences? Let me start with the latest statistics. First, number of days till an election. Here is what has happened since the rule went into effect: 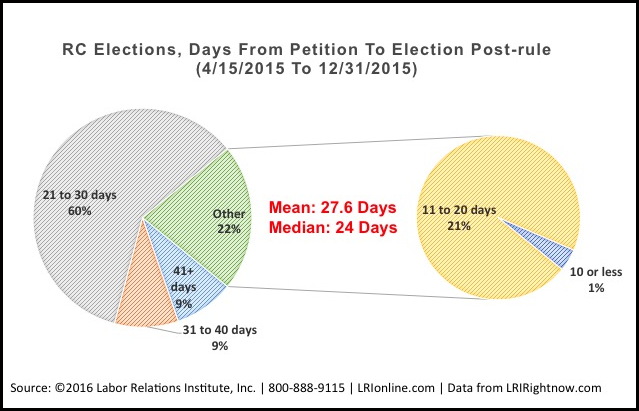 You can see from the chart, election periods are substantially faster since the rule went into effect. The average election happens in around 27 days from the date of the petition. But that average is a little misleading. About 10% of elections have a significant delay (several have gone more than 100 days from petition to vote). The median election period is 24 days. As you can see from the chart, well over half the time your election is going to happen somewhere in that 24 to 27 day range.

This is a lot faster than under the old rules. For the decade prior to the ambush rule elections happened in around 36 days (the NLRB goal was 42 days). So elections under the rule happen about 1/3 faster than they did before the rule was adopted. Many fear these periods could shrink even further. Our anecdotal experience (that’s quite a few anecdotes – we’ve handled nearly 100 elections under the new rule) is that the election period under the rule is pretty stable. Your mileage may vary, but if you get a petition you will have about 3 1/2 weeks until your vote.

How are these fast elections affecting election outcomes? Take a look: 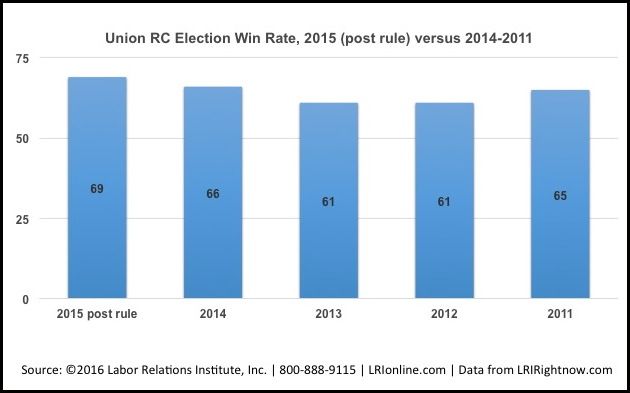 Unions supporting the reduced election periods argued that extended campaigns gave employers time to brow-beat employees into voting against them. They believed shortening election periods would increase their win rates. The actual experience shows that these claims of employer misconduct were way overblown.

Union win rates are up. Since the rule went into place unions are winning about 3 percent more elections than they did in 2014. If you go back further the win rate jump looks even more pronounced, around an 8% improvement over 2012 and 2013.

However, I think to really evaluate this claim you have to have some perspective. Unions have, for decades, hovered around a 65% win rate in union elections. The “jump” in wins isn’t out of this range, and there will be a number of elections in the first quarter of the year (elections tend to follow seasonal patterns) that could bring the win rate closer to what it was in 2014.

This increased win rate means around 50 more election wins this year. What impact will that have on union membership? Take a look at this chart: 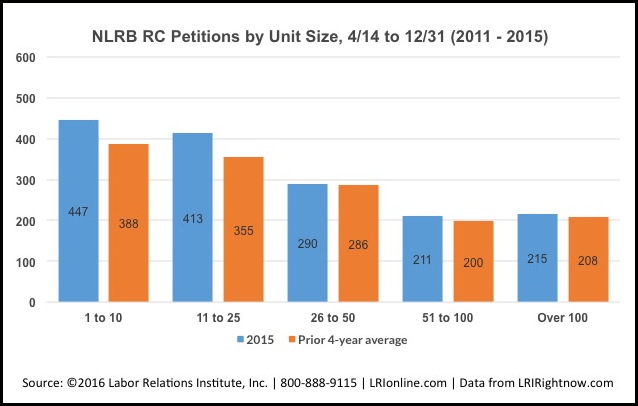 Unions appear to be targeting smaller employers at a much higher rate than larger companies. Since the rule went into effect smaller companies (under 25 employees) are over 15% more likely to get a petition than they were in 2014. At the same time elections against employers over 25 employees are essentially flat under the new rule.

This means that while unions are winning more elections, they are winning them in very small bargaining units. In other words, those 50 election wins will probably net unions 700 or so new represented workers (NOT 700 more dues-paying members). Before unions start generating revenue off those workers they first have to negotiate a contract. And if you’re running a union I think this will turn out to be one of the unintended, hugely negative consequences of the new rule.

If you’ve read INK for any period of time you’ve heard me say that unions don’t have an organizing problem, they have a message problem. They’re becoming more and more marginal. They are selling buggy whips to people who want an SUV.

Unions are trying mightily to change this perception problem with things like Fight for $15 and Alt-Labor. But those efforts are not resulting in new members. When it comes to actual results during bargaining – the thing you are selling in union elections – you need a lot of lipstick to make that pig look good.

In a fast election where employees barely get any information, where unions can apply the right amount of smoke and mirrors, they can win. But eventually it comes time to deliver what you promised. And in the harsh light of collective bargaining people quickly start to see that maybe, just maybe, the employer wasn’t brow-beating or threatening employees during the election. Maybe the employer was just explaining the reality of collective bargaining in an incredibly difficult business environment.

Once employees figure this out they feel betrayed by union salespeople. They wish things were back the way they were. And in today’s social media environment unions have to think very carefully about the potential blowback of all these dissatisfied and disgruntled members. In a world where figuring out how to get rid of your union is just a click away, it’s a big problem. One last chart: 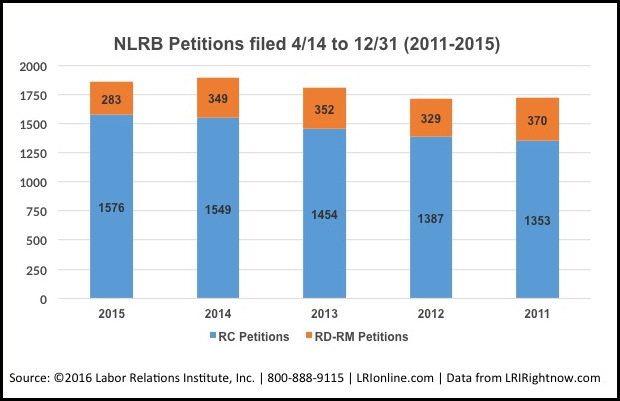 This is the most telling chart. Unions need to start winning a LOT more elections if they are going to just replace the members they lose each year to business closure and decertification. The net impact of the ambush rule on organizing activity: Zero. Zilch. Nada.

The total number of union elections in the 8 months since the ambush rule is actually LOWER than the same period in the year prior. Elections are basically flat over the last 5 years. There have been fewer decertification campaigns this year than in years prior. I attribute this to the fact that the new rule requires employees to serve petitions directly on their union (a terrible change under the ambush rule – clearly designed to intimidate workers who no longer want a union). I don’t think that trend continues in 2016.

The bottom line is that even if the union win rate in elections stays stable at 69% (heck, even if it was almost 100%) the net increase in dues-paying members would be minimal. That’s because so few people are being organized in the first place. The ones that are don’t get contracts that they’re happy about (when they get one). They feel sold a bill of goods. And ramming a union down the throats of American workers is just going to make this worse.

Unions are getting all they want out of this administration, but I don’t think they feel like they’re winning. That’s because they want the wrong things.