Each month we provide a tally of new union embezzlement stories (our Sticky Fingers feature), and in recent months we’ve touched on some of the larger scandals, such as millions siphoned off in the UAW training center charade. A recent Town Hall article pointed to documents that The Detroit Free Press obtained from the Department of Labor listing over 300 union locals in which fraud has been detected in the last two years. The crimes are usually committed by the local’s bookkeeper, president or treasurer. 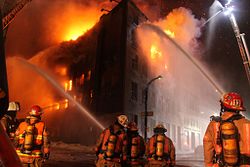 Fortunately, unions are subject to a higher level of financial scrutiny at the Federal level than most enterprises, and their own internal audit systems ironically detect most malfeasance. Unfortunately, union officials and members have devised ways to receive illegal financial benefit beyond kleptomania. In Kansas City, Kansas, firefighters bilked the taxpayers for almost $1 million in pay for hours they did not work through a practice known as “shift trading.” Prominent among the recipients of this largesse are firefighters who receive time off for “union business.” According to the article,

One fire department captain last year received 52 weeks of paid time off and made nearly $65,000, according to the UG’s [Unified Government] study.

However, the captain is a top official for the firefighter’s union. He said the record “reveals no abuse as written to and agreed to by” the union and the UG.

As bad as stealing dues money for personal benefit is, spending what is extracted from employees’ paychecks for something that would be blatantly against those employees wishes is equally abusive. Yet every year, unions spend lavishly on a politics and special interest groups that only represent the liberal/left agenda in the U.S. Since 2010, Big Labor has spent over $1.1 Billion on Democratic candidates and such groups as the Democratic Governors Association, the Center for American Progress, Planned Parenthood and the Clinton Foundation. Since 40% of union members historically vote Republican (and one would assume hold conservative values), spending 99% of such contributions on the opposite side of the ideological spectrum is a travesty, and theft by any other name.

Congressional Republicans are making an attempt to correct Big Labors theft of this type with a bill called the Employee Rights Act (ERA) that would force union officials to secure employee opt-in before their dues are spent on such purposes. Latest reports indicate up to 80% of union members support such a bill, but you can bet Big Labor (and Democrats) will fight it tooth and nail. Much of the AFL-CIO Martin Luther King conference was spent gearing up for 2018 politics, and in the Iowa governor’s race, almost $2 million has flowed to the Democratic candidate from the SEIU and many of its out-of-state affiliates. Nothing like taking the money from hard-working Americans in states other than Iowa to pay for Iowan politics!