How to Deauthorize a Union

Deauthorization: In non right-to-work states most union members are required to pay dues (or for Beck objectors a fee in lieu of union dues) as a condition of employment. This happens when a union contract includes what is called a union security provision. There is a process to get rid of a union security provision in your contract. It is called a “deauthorization” election. If you and your coworkers are successful in this election, the union will continue as your collective bargaining representative, but the union security clause will be nullified and you won’t be required to pay dues or fees to the union to remain employed. It is important to remember that your company cannot encourage or assist you and your coworkers in getting a deauthorization election at your company.

Beck Rights: Even if you have a union security clause in your contract you can object to paying any fees to the union other than for “representational purposes”. This means that you can ask the union not to take money that is used for politics or other non-representational activities. You can do this by exercising your “Beck” rights (named after the Supreme Court case Communication Workers v. Beck). To learn more about your Beck rights, please see the National Right to Work website on how to exercise your Beck rights.

Here are the steps to get a union deauthorization election started at your company: 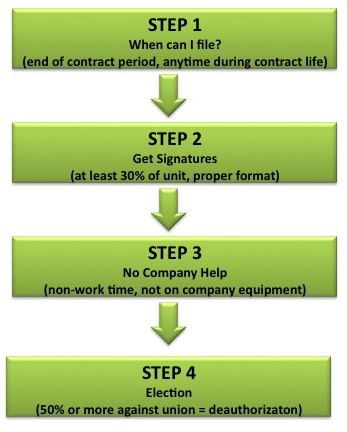 Step 1: Deauthorization petitions can be filed at any time during the life of the contract. There are no “contract bar” or “election bar” rules like there are with decertification elections.

Step 3: Employees can only perform deauthorization efforts during non-work times, and non-work areas.  Also, management cannot be involved in any way in this effort.

Step 4: If at least 50% or more of the employees vote to deauthorize the union security clause then the union security clause becomes void and you and your coworkers no longer have to remain a union members or pay dues or fees to remain employed. The union continues to represent all bargaining union members (even if you don’t pay dues or fees) and the rest of the labor contract remains in effect.

You can have signatures on more than one piece of paper, but you should have the text at the top of EACH PAGE of the petition so it is clear that every person signed a petition clearly describing its purpose. Remember only to collect signatures during non-work time and in non-work areas and do not ask a member of management to help with your petition. You can learn more about deauthorization elections at the National Right to Work website.