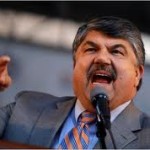 What is playing out at the AFL-CIO as Richard Trumka’s reign at the helm of the labor organization winds down is typical of labor unions in general. Instead of letting the successorship run a democratic course, Trumka appears to be attempting to hand-pick his successor.

Two current front-runners for the position are current AFL-CIO secretary-treasurer Liz Shuler, and Sarah Nelson, president of the Association of Flight Attendants. From an article in The Guardian:

Two top union leaders who insisted on anonymity said that early this year Trumka and Shuler were asking various union presidents whether they would support Shuler to be the AFL-CIO’s next president. These officials said Trumka, the AFL-CIO’s head since 2009, appeared at the time to be considering stepping down within a few months to make way for Shuler, but only if there were strong support for her in the federation’s 55-member executive council, which is composed largely of union presidents.

Several officials said Trumka dropped the idea of resigning early after the presidents of three large unions representing nearly half the AFL-CIO’s 9 million union members indicated they were not prepared to support Shuler – or anyone else at this point.

Neither Schuler nor Nelson will comment, presumably so as not to be seen as angling for the job before the convention in 2021.