In addition to the recent Canadian poll indicating that 8 out of 10 Canadians have no desire to join a union, Harris and Gallup just completed polls at the end of August indicating the American public thinks no higher of unions than their northern neighbors.

Gallup has been polling Americans on overall “approval” of unions since 1936, and every year for the last 10 years.  In 2009, the union “approval rating” dipped for the first time below 50% to 48%.  Since then, American attitudes toward unions have remained steady, with only a slight rise to 52% this year.

The major change for this year is the widening gap in partisan opinion of unions. The efforts of several states to curb the bugetary impact of public union’s monopoly bargaining position seems to have driven the further politicization of sentiment about unions.  Democratic approval has climbed back up to 78%, near its high of 80% in 2007, while Republican approval has fallen to its lowest point in decades, at 26%. 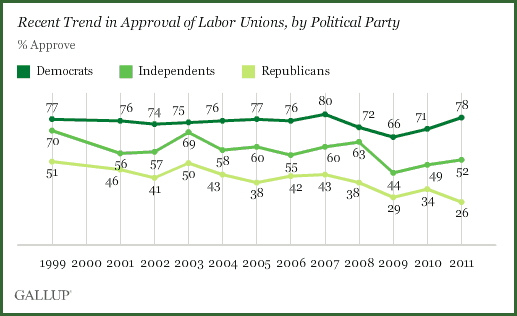