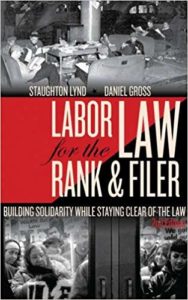 Although businesses tend to focus on the traditional employee collective action threat of union organization, with the goal of collective bargaining in mind, there has been a recent rise of non-traditional organizational action.

Tech workers at Google, rideshare workers (Uber and Lyft), and those in the gaming industry have recently used the ideas from a book entitled “Labor Law for the Rank and Filer” written first by longtime labor historian Staughton Lynd in 1978; and then more recently revised with labor organizer, Daniel Gross in 2008.

According to Lynd and Gross, Big Labor and its menagerie of organizations fall under the umbrella of “business union.” A business union is typically “controlled from the top down by officers and staff (usually white males) who are not regularly employed at the workplace.” The biggest negative of a business union is that they are preoccupied with acquiring a bargaining agreement “that requires workers to give up the right to strike and any say in the company’s major decisions.”

Rather than organizing around a business union, Lynd and Gross recommend “solidarity unions — that is, worker-led groups that are not typically certified as exclusive bargaining agents under federal law and therefore don’t need to win majority support to exist.” In this set up, groups of workers “decide together on a course of direction action” to right any company wrongs. And they do so on a case by case basis without giving up concessions for the future.

In the case of Google, many employees argued for filing lawsuits or organizing with a union, but in the end, those espousing the non-traditional approach won the day, and the results speak for themselves.