As a follow-up to our Insight article, this Update article will highlight some of the results from this week’s election, and Big Labor’s response.

Imagine waking up today as a union leader, having just burned $90 million of your members’ money, and having to tell them that you came up empty-handed. Oops!

Well, that’s the situation in which unions find themselves today. Figure AFSCME spent about $90 million of their members’ hard-earned dues to support candidates that a whole bunch of the members don’t support. The National Education Association took a break from thwarting education reform to pour $40 million of their members’ money down the same rat hole. Not to be outdone, the SEIU burned $44 million or so, too. Nice.

But worse yet for labor, 41 anti-democracy candidates who had voted for, cosponsored or endorsed the “Card Check” bill were defeated, including at least 31 who co-sponsored the bill in the 111th Congress. In the Senate, eight candidates who supported card check lost while West Virginia Gov. Joe Manchin, who came out against the bill, won. See a pattern here? Worse yet for labor, South Carolina, South Dakota, Arizona and Utah, overwhelmingly passed constitutional amendments requiring a secret ballot election in organizing drives.

Of the $4 million spent by the SEIU, they endorsed 29 House candidates, with only 7 winning. The AFL-CIO lost 15 Senate races and 59 House races. Ouch. No wonder they don’t like secret ballot elections. Coercion works so much better. 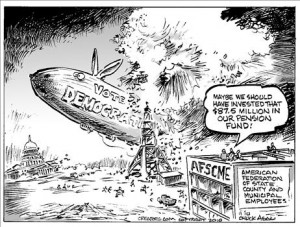 Further denting Big Labor’s EFCA hopes were four state ballot initiatives requiring the secret ballot election for union elections (South Dakota, Utah, Arizona, South Carolina) – all of them passed. And in perhaps a more devastating blow to unions, a ballot initiative in San Diego County, CA, passed by almost 2 to 1, forbidding unions from negotiating Project Labor Agreements (PLAs) on construction projects financed by the county government. Several other California cities took similar action earlier this year, and if this rolls across the country it could be a sledgehammer blow, particularly to construction-industry unions.

What is Big Labor’s spin on the election results? One favorite Obama phrase we’re not likely to hear from them is “elections have consequences.” Mary Kay Henry, after boasting on the manpower resources that SEIU members drained from American companies during the election season in order to do Big Labor’s politicking, had this to say, “We are looking to the new leaders elected tonight to show up in January ready to work for the American people — not for the agenda of the nameless, faceless corporations who poured hundreds of millions of dollars into our political process.” Trumka further boasted of all the manpower unions diverted to political objectives, while conceding that not even 65% of “union voters” voted for union-friendly candidates! It is apparent that neither Henry nor Trumka understand that the “nameless, faceless corporations” and small business are who create jobs, and for some reason still tend to believe job growth comes from government intervention in the marketplace.