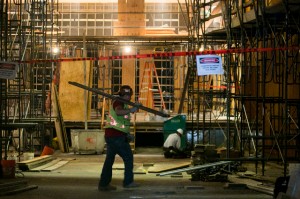 Fast food restaurants aren’t the only businesses suffering from the assault of alt-labor organizations, as Tufts University discovered recently. The Boston area school is one of the few in that region that have not signed a union-only labor agreement for construction projects. And even though not all of their projects are handled by non-union labor, a group calling itself the Tufts Labor Coalition organized a rally of 40 students, who spent an afternoon chanting and submitted a list of demands to the university.

In the era of smartphone apps, another alt-labor tool recently emerged for use by the ranks of day laborers. The app allows laborers to rate employers, log hours and wages, take pictures of job sites, and identify (down to the color and make of car) employers with “a history of withholding wages.” It will also allow the users to send instant alerts to other workers. After testing in the New York City day laborer shops, the hope is to roll the app out to all kinds of workers across the country.